Michela Magas bridges the worlds of science and art, design and technology, and academic research and industry, with a track record of over 25 years of innovation. She is innovation advisor to the European Commission and the G7 leaders, creator of the Industry Commons and Member of President von der Leyen’s High Level Round Table for the New European Bauhaus. She sits on the Advisory Board of CERN IdeaSquare – the CERN space for frontier innovation (ISAB-G).

In 2017 she was awarded European Woman Innovator of the Year and in 2016 she was presented with an Innovation Luminary Award for Creative Innovation. In 2019 the Leonardo Journal, by the International Society for the Arts, Sciences and Technology published by MIT Press, recognised her as an Outstanding Peer Reviewer.

She is Chair of the Industry Commons Foundation with a Steering Board of thought leaders in Open Innovation, which is building a legacy for cross-domain collaboration and data interoperability. She is Innovation and Sustainability Manager of OntoCommons which creates an ontology ecosystem for industrial interoperability based on data documentation for Industry Commons.

She is the founder of MTF Labs, a global community platform of over 7500 creative innovators and scientific researchers. The platform provides a test case for innovation in areas as diverse as neuroscience, forestry and microcomputing, and has been hosted worldwide by partners including Microsoft Research New England, Centre Pompidou in Paris and the London Symphony Orchestra at the Barbican in London.

Michela is currently member of the Expert Group for the Design of the European Innovation Council Marketplace, and also advises on the role of Culture and Creative Industries in the context of EU Industrial Policy. She has served on the CAF Advisory Forum of the European Commission’s Horizon 2020 programme 2013-2018, both at meta level regarding future directions for the programme, and more specifically as coordinator of the recommendations by the Innovation Working Group.

Michela was Innovation Director of #MusicBricks – a European Innovation Action project that placed exclusive tools developed by some of the best music tech research centres in Europe into the hands of creative developers and makers, and has taken them to market. The project registered over 5M impacts on social media and yielded multiple patents and products in a very short time, generating its own innovation ecosystem, which has now been scaled up into the Industry Commons.

She was Scientific Director of MIReS, a European Commission-funded project investigating the future of music technology, in conjunction with seven of the top music technology research centres in Europe, and co-authored a patent in music machine learning. Her work has received the ‘art meets science’ NEM art award twice and has been included in the Future of British Innovation at the Science Museum during the London 2012 Olympics. She has served as jury member of Prix Ars Electronica.

Michela co-founded Stromatolite Design Innovation Lab in 2000, developing futures concepts for a series of international clients including Apple, Nike and Nokia with Peter Russell-Clarke, who is now part of the Apple Industrial Design Team. 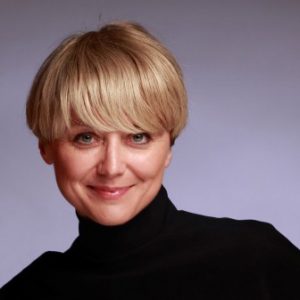